Earn points while you shop!

A performance horse or racehorse cannot perform to full potential without air – the respiratory system that moves oxygen through the body.

🌱The main goal of the respiratory system is to transfer oxygen from the air that is breathed to the red blood cells. From there, oxygen is transported throughout the body.

🌿Carbon dioxide (or CO2) is a waste product of metabolism and is eliminated from the body via the lungs. If this respiratory system is compromised in any way, it will severely affect the athletic ability of a horse.

🌱Anything that decreases the effectiveness of the equine respiratory process increases the chance for the development of respiratory disease, such as:

🌿Another very important way by which the cilia clearing – or mucociliary clearance mechanism – can be overwhelmed and rendered less effective is from not allowing the horse to lower its head during transport.

In fact, the transportation process can stress the defense mechanism of the lungs in several ways.

During the respiratory exam of a horse, the veterinarian looks for clues such as:

‘InHay ExHay’ helps to treat many different symptoms of distress of the lungs.

Could your horse benefit from this product?

'InHay ExHay' covers many possible lung issues with ingredients such as:

🌿Coltsfoot is excellent for cleaning mucus from the lungs and bronchial tubes.

🌱Eyebright is considered a great remedy for treating allergies and respiratory discomfort. The natural astringent-tannins found in the herb may help reduce the mucus discharge during colds and flu by tightening the mucous membranes.

🌿Elderflower is used for common cold, flu (influenza), swelling (inflammation) of the nasal cavity and sinuses (rhinosinusitis), and many other conditions.

🌱Mullein’s mucilage content is soothing for inflamed and irritated lung tissues and has antispasmodic properties, which helps to calm spasms, and can be used to expel mucus from the lungs.

🌿Ginger promotes respiratory health by eliminating air pollutants out of the air passages before they have time to irritate the lungs. It also relieves congestion and improves circulation to the lungs.

To name only a few of this formulas powerful ingredients carefully chosen to work together in the best possible way!

This supplement is not intended to treat, cure or prevent any disease, illness or medical condition.

I love this product! I have my 2 barrel horses on it. I’m loving the quick results I’ve seen and it is now a staple in my program. I will always recommend this product to all my friends.

B
Brooke Olson
Love this product!

I love everything about Sharpedge products and I have used their products throughout my years owning horses. The InHay ExHay was added to my arsenal to assist my barrel horse in his lung function, he’s a bleeder & has seasonal allergies so I like to give him anything that will help him breathe easier and recover faster. I’ve noticed a huge difference since starting him on this product and will never not have it on hand! 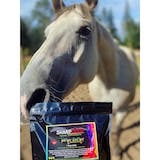 Gave this to my mare recovering from pneumonia, she loves the taste , and it is helping her , will keep feeding it even if she is fully recovered

ive tried all the popular respiratory supplements and nothing seemed to help my gelding his allergies and i noticed his eye cleared up in 3 days! you can just tell he feels so much better! Thanks sharpedge